Home Archives Profile Subscribe
Next Thing You Know We'll Be Going to the Mall
Countdown Time To (Shhhh!) School

Working the Transition: Prepping Back to School with Bikes & iPad 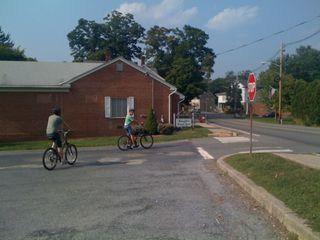 Charlie will be back in school next Tuesday and Thursday he and I started working the transition in full force.

I made a Back to School social story using Stories2Learn on Charlie's iPad---my very nice aunts read this SFWeekly article about how the iPad has helped my friend Shannon's son Leo so much and decided that Charlie must have one. So thanks to my aunts and also my parents, I hied me over to the Apple store last week  and exited all iPad'd up.

My first goal was to make a social story about going back to school for Charlie and I did so yesterday morning. Jim had gone to teach and Charlie was up at his usual time. He smiled and said 'no' to a walk and then paced as I had several 'duh' moments putting together the social story on the iPad. You can upload photos, text, and sounds on Stories2Learn and as I was recording myself saying 'I am going back to school,' Charlie said 'no, no school, no'---not a surprising thing to hear Charlie say.

However much he likes school (or anything or anyone, indeed), returning to that place or seeing that person again after a (fairly long) absence makes him anxious. I think Charlie says 'no' as that's his initial, emotional response ('no, I'm just not ready yet'). Given some time to think things through, and just given some time, Charlie is ok encountering said place or person, and it's important (as I've learned through often painful experience) that his expressing of his worry needs to be acknowledged and validated. So rather than us responding 'oh no, you like school' (I mean, how do I know, really, I'm just a mom), I do my nod and uh-hum and mmmmm.

I also kept yesterday iPading and showed Charlie the result. It usually takes him a bit to warm to new things (certainly to new devices) and I could tell he was thinking 'oh no, now what is she trying on me.' He definitely followed the 'Back to School' story, and the combination of visuals and sound, and the ease of tapping (once I showed Charlie where to tap) seems to appeal to him. (Whereas, when we show Charlie a piece of paper with more than 4 or 5 items on it, I'm never quite sure how much he absorbs.)

I've installed some simple spelling and reading programs on the iPad, too, and have been enjoying procrastinating prepping the territorial expansion of the Roman Republic by app-browsing on Moms With Apps and Apps for Autism and Swiss Miss's iPad selections. (I'm sure, though, that you would be able to resist trying out demos for doodling apps and  in favor of reading up on the Lex Canuleia.)  I've been  weighing the  pros and cons of various apps that turn the iPad into an augmentative communication device. ProLoquo2Go is a bit pricey (especially for something that Charlie might only sporadically use). There's also Minspeak and iCommunicate and TapToTalk.

And yes, we will 'let' Charlie use the iPad for fun too.

After talking about going back to school, Charlie and I drove up to his school and all around it. He looked the building over very solemnly. He had an early lunch (well, we hadn't really bothered with breakfast---we are still on lazy summer mode) and  went up to his room and proceeded to nap till Jim came home.

This transition stuff, it can take a lot out of a boy.

Too, Charlie may have just wanted to rest up prior to another serious bike ride (and in 94 degree heat). Jim rested, we got the bikes loaded, and out we went to the Jersey horse country trail that Jim thinks is their favorite. They went 15 miles with Charlie choosing the path: He led them first (gunning, I mean pedaling furiously, his bike) to a convenience store for a cold drink, then to a road by the river, and then to a part of the trail that is nice and shady.

Summer isn't quite over yet and I have to say (and very oddly for me, who usually am counting the days till Charlie's school starts so we can all return to the usual school structure; plus I do not like the heat) I kind of wish this one won't end.

Huge huge thanks PLUS to Aunt Anna, Aunt Mal, and GongGong and PoPo!

Kristina - I've been searching for someone willing/able to write short reviews of ipad/iphone apps for the Autism at About.com site. Any chance you'd be interested? You can reach me at lisa@lisarudy.com.

Wow! We're loving our iPad that we've BORROWED. Am wishing we had aunties and family to send us off to purchase. What a blessing and a treat!

Can't wait to read more about how the iPad opens up new vistas for all of you. :-)

I have made a bookmark file with sites/references to the iPad, I see so many now.

Honestly, use of an iPad could be the new *shhh* 'c,u,r,e' for children with delayed communication. No?

Yes, we have an iPad too and my son loves it. There are many programs for autistic children in Apple's app store for all levels. I'm glad you gave the link today to this app, I hadn't seen it before. What is especially nice is the ability to add your own pictures. In November, the iPad will get the ability to print so this app will be doubly good as I'll be able to print out the pictures directly from the iPad. My son also enjoys and often relies on social stories and this is perfect. Still, I hate how they always make our apps more expensive than they do for typical children. But, I realize the market is smaller so they have to make up the costs of development.

@Nik,
Extremely nice relatives is all I can say! I'm going to send some fairy-god-aunty-types your ways so Nik can get his own!

@Barbara,
I'm pretty hopeful about the iPad. The screen is definitely easy to use and it is a nice size. Charlie still struggles to use the touchpad on a laptop and he's not a big fan of the mouse and the iPad seems (so far) more 'natural' for him to use.

@Kent,
I think you have a point about the cost of the apps...... and I just never know if Charlie will take to something.

I've been thinking of using the social stories app for other things besides social stories, since it's easy to add a photo + text + audio.

One reason I've hesitated about something like ProLoquo2Go (Charlie's had an iPod touch for awhile and I could have gotten it for that) is that there are simply so many images included and I don't think Charlie would use all of those---I always use photos for him anyways. Some of the other apps (like iCommunicate) do come with photos but I'm not sure what Charlie might make of them.

May I ask which other apps you've used (and found good)?

I think the iPad is worthy of your hope, Kristina. A blogger I follow, an adult with CP, who has use of her L thumb, said that technology has finally caught up to her need. I think this is true for every person who struggles to communicate but has the potential with a bit of motor control and vision. There is site called iPad for Babies. With the plethora of new apps, a child/person can progress in skills for language and communication at their own pace and likely faster than with other previously used technologies. (Characteristic of the 'c' word.)

Charlie seems to be reacting much the way Casey is about going back to school,...reluctant. Despite our having a tour of his classrooms and locker twice, accompanied by a video of the whole thing, plus copies of his schedule strewn around the house and car, he remains aloof about the whole thing. For him, it just doesn't set in until he experiences it, but I think our prep work will help these boys get ready in their own way.

@Bonnie,
Aloof is the word I was looking for to describe how Charlie feels about the return to school---Jim drove him by school again this morning and said Charlie was looking around intently, but in no hurry to get out of the car.

@Barbara,
Yeas ago I got a touchscreen to attach to a laptop we had set up for Charlie. It (the touchscreen) was so balky, and cumberson, and in danger of falling off. Really, I would have given anything (well, a lot) for a touchscreen like the one on the iPad when Charlie was younger.