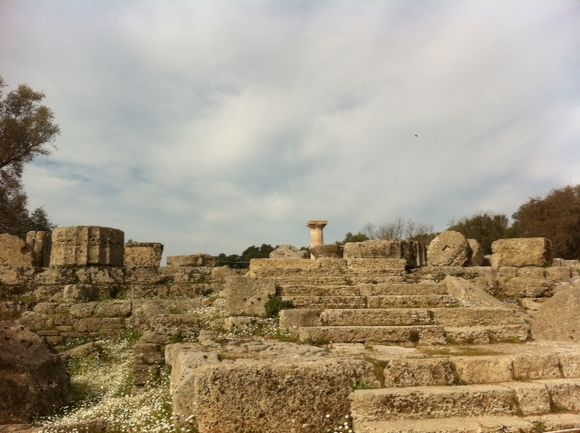 The temple of Zeus was destroyed in the 6th century AD by an earthquake on the scale of the one in Japan last Friday. About 60% of the columns are now strewn around the temple's base; the one you can see was put together by archaeologists. The columns are made of massive stone drums that had a hole through the center; a wooden peg was inserted through this to hold them together.

We were again the first at the archaeological site, thanks to 6.30am wake-up calls (just in case you thought this trip was 'spring break in Greece,' i.e., PARTY, we are here for a CLASS and a presentation and essay are required, not to mention attendance taken at 8.30am on the bus). I've been to Olympia twice before but this time felt I really got a sense of where things are on the site: every structure is in ruins at best so it requires knowledge + imagination to think your way back to the site as it once was.

After lunch (vegetable soup; good but not so visually attractive so to speak as the salad below), we drove to Delphi under Mt. Parnassus (the home of the Muses). We stopped prior to that to view the stunning suspension bridge at Rio near Patras. I'll wager it is prettier than the Golden Gate; the Rio bridge seems to be sporting four white sails of cables.

Anxiety on the homefront led to no bike ride at the beach and what I would call unhappiness in droves but things were restored to rights. My parents, are total troopers, Jim is the best dad ever for our boy, and Charlie has a lot to contend with and sometimes things are too much.

I rely almost exclusively on texting to stay in touch with Jim when I'm on these trips and it's really the best way to communicate with the homefront, not to mention the quickest (as in immediate), and least intrusive to others around me (unlike hush-hush phone calls).

It's inevitable: I look at ruins of a Greek temple and the efforts to restore one to something like its original condition and can't but think that such restorative work that pieces together the fragments left after destruction, is part of the job description of parents, 'carers,' of boys like my boy. We're archaeologists reassembling what there is into something whole, to the limited extent that we can.

Though occasionally you find something almost whole, like this statue of Nike, Victory, in the museum at ancient Olympia.