The internet in my hotel room here in Athens suddenly stopped working this evening, right as I was updating my phone and starting to write this. So I had a frozen phone and a non-online computer which is should not be the stuff of crisis, except that, being across the better part of a continent and an ocean from my boy, being connected is a sine qua non.

The man at the front desk was incredibly helpful (and patient) and I was soon back online (took a bit longer to get my phone working again). The little flutter of 'oh no' did remind me that one reason it's been possible for me to go these past three years to Greece is, in a word, technology.

When I first went in 2009, I used email when there was internet. Not all the hotels we stayed at had this and I'm not one for internet cafés. Plus I prefered to stay in the hotel and keep track of my students. I called Jim, too, though calling isn't that convenient for spur-of-the-moment questions and occasional worries---and these, I realized, were really the reason Jim and I needed to be in touch.

In 2010, more hotels (but not all) had some sort of internet access. Plus, Jim and I had found texting a most convenient and efficient way to communicate. When Jim asked me how to deal with a moment of Charlie being 'out of sorts' with his stomach and I was able to respond quick as can be while standing amid a display of neolithic artifacts at the archaeological museum of Thessaloniki, I said to myself, texting is the way to go.

This year, text text text; some email, a good dose of Google chat if Jim and I find each other online at the same time. It's been quite effective so I gave myself a bye for worrying when I found myself laptop- and phone-less. Indeed, I reminded myself, I never would even have thought of attempting these trips without my 'devices.'

The stele above in the archaeological museum of Dion (near Mt. Olympus, in the northern part of Greece) depicts a mother holding a little boy. A stele being a stone grave marker, it's likely it was made for the grave of a child who died. I was very struck by the sorrow and tenderness in the mother's figure as she embraced her son. The little boy is shown feeding his pet rooster a bit of food for the last time ever: Between the way the mother is shown to hold him, and the inclusion of the rooster, I got a sense of how much the boy's parents were missing him when they had this stele made, and how much they loved him. Perhaps they had the rooster carved into the stele, so the little boy would have it with him, wherever he might be.

It is something that such feelings are communicated via a carved piece of stone to us today.

Truly, some things never, ever change. 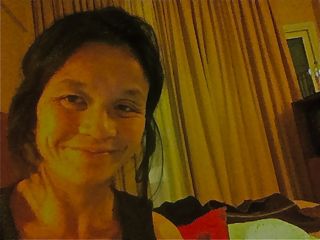 So incredibly beautiful and poignant. I'm no art historian, so may I ask if there was a direct connection between this stele and Michelangelo's Pietá?

I certainly enjoyed being an "armchair traveler", Professor Chew, and thank you for leading me on this very enlightening trip! I wish I could take your class. All my best wishes for a happy return to your "tight team o' three".