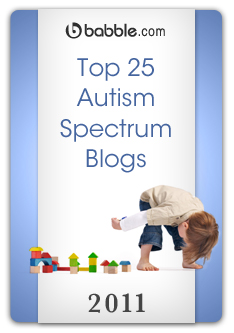 I started writing the earliest incarnation of this blog, then titled My Son Has Autism, back in June of 2005. Though this blog has changed names (it was Autismland for some time before becoming We Go With Him---Jim, my resident wordsmith, coined both names) and even web addresses (it was originally at http://mysonhasautism.blogspot.com and then at http://kristinachew.com and now at http://autism.typepad.com), and though I took a bit of a hiatus from writing here while writing Autism Vox (http://autismvox.com) and then co-writing the autism blog at Change.org (http://autism.change.org), I think I can say I have written something about Charlie and autism in some online space every day since the 18th of June, 2005.

Whatever this blog's name, it has always been meant to be a space to write about Charlie and Jim's and our lives raising him, a child on the moderate to severe end of the autism spectrum. It's meant to be a chronicle, a journal in the basic sense of the word as a daily account (jour being 'day' in French), and also a public record about the realities of raising an autistic child as frequently difficult and heart- and soul- wrenching, sometimes messy, often a bit wearisome on the bank account and---may as well get real---the body and the psyche, while always meaningful and (even on the worst days) full of joy, beauty, and love.

That sounds like a bit of a manifesto, doesn't it?

While, in the early days of blogging here, I occasionally talked about 'issues in autism' like vaccines, I decided that I preferred to keep the incendiary stuff a bit separate from Charlie's story. Autism Vox and the other blogs I've written have been wonderful places to write about autism from more of a political/advocacy angle. Currently at Care2.com I've been writing both about autism and disability and also about topics quite unrelated to them. To everyone who reads what I write here, or who has read what I've written elsewhere, thank you.

I'm over-the-top honored that  We Go With Him has been included among Babble's top 25 autism blogs of 2011. It means a very lot that this little space where I record the mundane details of our daily lives has gotten such recognition.

Babble's description of We Go With Him notes that my focus is on 'Charlie's activities rather than his autism' and that I present 'him as a growing, active boy who loves to bike, run, and pursue other adventures.' I really see We Go With Him as all about our adventures with Charlie. Sometimes these are the same from day to day (all of those bike rides); sometimes they are unexpectedly hair-raising. Some have taken the three of us to repeated visits to the ER. Quite a few of these adventures happen at the beach--yes, the Jersey shore (which is not only the tawdry land of bars and debauchery presented on that reality TV show)---and, lately, all of them happen in New Jersey as travel has become more unsettling for Charlie as he has gotten older. When he was little, we used always to take him on trains, planes, subways, and ferries. Adolescence was not kind to Charlie, I have to say; it was when he turned 11 that we started to have to give up those adventures that took us beyond New Jersey.

But I'm a firm believer that adventure is to be had everywhere and anywhere, even on one of the long walks Charlie did with us numerous times last spring, summer, and fall. These walks followed an old bike route of Jim's and Charlie's and involved walking through such really exciting settings suchas drugstore parking lots, out-of-use freight train tracks, and cracked and unweeded Jersey sidewalks. Other of our travels take us on grand tours of anomalous New Jersey suburbs (though there is always more to meet the eye) and, again and again, to Jersey City, form which we get a fine view of lower Manhattan (without having to visit it).

Life with Charlie is a grand adventure. Three times since I started writing this blog I've been fortunate to travel to Greece with groups of my college students---yes, those were some adventures, too. Much as I love Greece, I know the best adventures I've had are always those with Jim and Charlie, often (of late) in our trusty white car (which has been driven a shocking amount of miles, considering we have not yet had it for 2 years). We do go with Charlie, and it's a good, a great, life.

So let me tell you about one more day of this life, Wednesday the 13th--the Ides---of April, yesterday.

The day began at 4am when Charlie woke up. As I was groggily helping him prepare something to eat, it occurred to me that this early wake-up could presage a boy ready to go to bed earlier (these days, Charlie is often awake till midnight). On Wednesdays, an earlier bedtime for Charlie is especially preferable, as Jim teaches late on Wednesday this semester and Charlie insists on waiting for him, even falling asleep on the couch once.

Charlie had another good school day. His school was supposed to have an autism walk in their quite large parking lot, but, due to the rain, the walk was held indoors. Charlie enjoyed it, his teacher wrote. Later, while he was bouncing around on a huge exercise ball as part of his leisure schedule, the ball popped under him and he got (understandably) upset, but in a contained kind of way. Indeed, he cheered up quite soon. In the early evening, he had his third swimming lesson and while he did some powerful moves through the water, he was (his instructor noted) less focused than last time (but 4am wake-ups and popping exercise balls can do that to you). Driving home, he must have been starting to get really tired as he said 'bedtime' about every 30 seconds and I confess, at one moment I really thought of telling him to be quiet---only, of course, all these years of ABA and speech therapy have taught me, telling Charlie to be quiet is the surest way for him to be even louder and more verbal.

And who am I kidding? Once upon a time we worried Charlie would never talk and here I was thinking of telling him to stop talking!

I guess you could say that shows you how very far this boy has come. Just like his mother and father, Charlie has a lot to say.

A huge part of this adventure has been us learning to listen for his words, and, always, to enjoy the journey.

congratulations on getting such an amazing ...i enjoy reading this blog..it really helps to know someone is in my daily shoes as well. thanks for all you do.

Congrats Kristina! You are a rock.

Well deserved congratulations! You and Charlie smiling in the car says it all. Happy early Mother's Day.

I love this blog, I feel happy to read it and know Charlie a little better. It's funny, he reminds me of my son and my son was born in June of 2005, ha!

So happy to see you were recognized - congratulations! Reading your blog has become part of the rhythm of my day.

Congratulations on the blogging honor, Kristina. You deserve it.

thank you, friends! couldn't do it without you.

Congratulations Kristina! This is well deserved recognition for your gift at providing a glimpse into your world. Thank you!

Thank you, Kristina. Your blog has touched and inspired me.