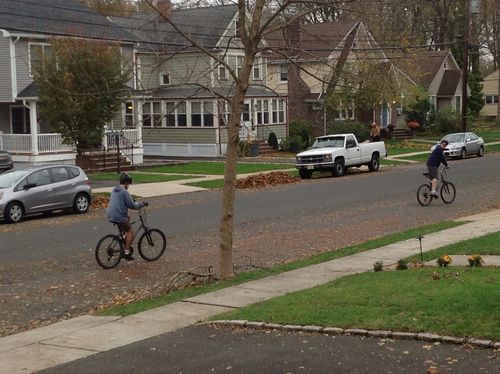 With no familiar haunts (school, fast food Mexican place) open -- I mean, it could be plenty worse, some 2 million people in New Jersey have no power and many stood in line for hours to fill gas cans to fuel generators:

(this picture was taken at a gas station 5 minutes from our house) -- Charlie, and we with him, gutted out Wednesday. We got the 'obviously crazy / completely for us normal' idea of driving to a central Jersey town where another Mexican fast food chain had a restaurant that was open, encountering 100+ car lines at gas stations that blocked traffic and more downed trees and non-working traffic lights than you could shake a leafy twig at.

But if you want irony, or ways to reflect on want you once were and who you are now, nothing beats buying two of the same vegetarian burritos and one chicken one and random other items in a Mexican fast food place where people are charging cell phones in the restroom and snarling at their very orderly half-Asian American twin daughters who must have no school like Charlie but can be told to sit at a table by themselves so their parents can get a little peace and quiet -- all right across the street from the beloved library where I used to spend evenings and weekend afternoons reading books and journals on Ancient Greek and Latin poetry and wondering how I could always make sure I would do just that.

Charlie was wary of the strange burrito but ate some; Jim, after driving for some hours (really -- detours everywhere due to fallen trees) was less so!

I'm sure driving around so much was not the wisest thing to do what with the limited number of gas stations open. Charlie was very nervous all day, his eyes sort of bugging out with a certain franticness. Trying to assuage his anxiety being Our Only Goal In Dealing With Natural and Any Disasters and Fracas, we actually did another ride that became way too long in the evening, finding ourselves unable to turn around (blocked turnabouts were rife) on a state road that was only lit by the lights of other motorists, as the power west of us (the direction of Charlie's school) seems to be quite out.

We made it home and Charlie downed the white rice I had cooked before leaving and a lot of crackers and some apples and ended up smiling at me as he typed on his iPad. He had been awake around 6am, ran down the stairs at 6.50am in perfect timing to catch the bus, had there been one; he was asleep by 9.30pm.

Well.Jersey City is now under a lockdown from 7pm till 7am, the National Guard drove humvees through the sewage-watery streets of Hoboken, and the beach island (that Charlie so loves that we had to stop visiting it this past year because it was too hard to come and go) is a mass of sand piles, broken boardwalks and beach houses, and a roller coaster in the ocean. This is a common scene in our town and throughout New Jersey.

But the point is, we made it through another day together.

Thinking my words are meaningless but feeling strongly about expressing my concern & celebrating the passing of not too bad day, for Charlie & you.

Wow! It's amazing the difference being on the south side or north side of the storm. Our home captivity ended for me yesterday by going to work and for Rufus today by returning to school, with some minor distractions to a movie and trick-or-treating yesterday. I keep on trying to reconcile the news pictures of Hoboken with last winter's tour to Steven's with my daughter. It really makes you shake your head.

FWIW, I'm wishing you luck in keeping safe and sane and thinking of you all as I see NJ on the news.