A Boy in the Little Crowd

I stood beside Charlie in line for this very tall 'frog hopper' -- that's what he knows this ride as because the first, much more mini, version he rode years ago was called that. It's a simple ride, lifting riders straight up and then falling fast with a quick stop-bump.

The (original) frog hopper stop-bumped about four times on the way down and Charlie used to get the biggest grin at each jerk. The mega version only stops once, after dropping riders from a far greater height.

Sunday night, Charlie was serious the whole time. While he'd downed fries and ketchup before the ride on Thursday, the first time we visited the little festa (in Jersey horse country, after 11 miles on the trail), on Sunday he didn't want any. Maybe knowing an empty stomach would feel better during and after the big frog hopper?

Charlie had his idyllic grin shining full on his face as he and I stood in the line behind a gaggle of 14-ish girls. He shot me a look, communicating and sharing his delight.

For once in a long time, his was anticipation of a happy sort. There was, as not in a long time since Charlie entered puberty and through many moons of just trying to live through one stress-moment to the next, a feeling of a certain kind of companionship running through him and me.

Charlie feels it all the time on bike rides and other times with Jim whom he's now utterly, intuitively close to. Things are different with me and I consider that a positive development. I've learned that as the mother of a teenager I need to step back, show affection without babying -- I really have yet to figure out how to do this.

Charlie took off his seatbelt soon as the ride returned to earth and stood up. He paused, needing to collect his thoughts (including that the way the other kids were walking was to the exit). He walked back to us following the 14-year-olds. He moved at a nice pace, very poised and for a few minutes it was not apparent how rare it is that Charlie walks so, unaccompanied by aides or parents hovering, among other kids.

Charlie has two days of camp and then ESY starts on Wednesday. Quite a lot of transitions! With it all in mind, he is doing his 'kitchen/what would be called the dining room' pacing while listening to Abbey Road (via iPad to ear), Jimi Hendrix playing upstairs in his room. 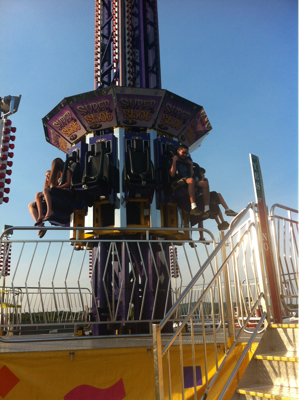 Posted at 20:41 in Adolescence & Teenagers, Growing Up, Motherhood | Permalink | Comments (1)

The boy of summer.