You should have seen the look on Jim's face when I told him that the U.S. and Cuba will restore diplomatic relations. He is a cultural historian of 20th century American religion and history who, on further quizzing, says he remembers when Fidel Castro came to power and Cuba became Communist. (Jim was about 4 years old when all that happened.)

Fittingly enough given the era (early 1960s),  we ended up on Joe DiMaggio Drive in his place of birth this morning. It's down Ferry Street, across the railroad tracks and down by the water where Joe's father must have had his fishing boat.

It was the latest testament of Jim's being in perpetual bike-trail-scout-mode since we flew (not biked, though we thought of it for about 50 seconds) to San Francisco last Christmas Day.

It has been a year of profound  transition, in which changes of an inevitable kind -- my parents getting older, my older relatives having health problems, Charlie getting older, Jim and me getting older -- have become evident; have needed to be faced. As of last Tuesday, I am closer to 50 than to 40. These past several weeks I have been feeling every inch An Adult, in numerous dealings with health insurance companies, healthcare providers, lawyers and the occasional utility worker.

Charlie turns 18 next May and will be legally an adult. That is why, early this morning, Jim and I appeared at court in the birthplace of Joe DiMaggio, to attend a hearing regarding our petition for Limited Conservatorship of Charlie, so that -- just we have for all of his life so far -- we will be able to make decisions about Charlie's education, his medical treatment, his place of residence and more when he is an adult. (My friend Laura Shumaker describes more about the process to obtain this in regard to her son Matthew.)

Our attorney in New Jersey had advised us that it might take a year from the time we started the process of obtaining conservatorship until it was granted, and that we should get things moving once Charlie turned 17. As things turned out, Jim and I met with an Oakland attorney in late August and then, with her guidance, had Charlie's psychiatrist complete a Capacity Declaration. Reports from the Regional Center, a court investigator and an attorney appointed by the court to represent Charlie were sought, written and sent. On Tuesday night, I put copies of all these documents into my bag.

We didn't need to refer to them. Years of prepping for IEPs has instilled habits of semper paranda in me and that, while PDFs in my email inbox are great, it is best to have paper copies.

Our attorney and the court-appointed attorney chatted with us before we went into the courtroom. The hearing itself took only a few minutes. Our case was the seventh but only the first case (involving a parcel of land and a backstory that could have been good fodder for Dickens or Steinbeck) took some time. Once summoned before the judge, we were quickly told that we would be granted all the powers of conservatorship that we had sought.

Yesterday, December 16th, was Jim's and my nineteenth wedding anniversary. We were married in Berkeley some ten minutes from the house we now live in. This mid-morning, Jim and I walked inside it and I set all the documents on their pile on the living room table (which also has a pile for Charlie's educational documents and others for his medical concerns and health insurance).

Another day of doing what we can to make the world a good place for Charlie. 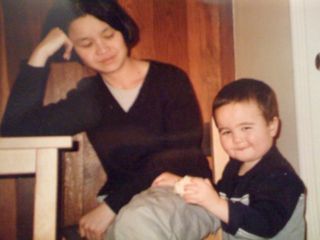