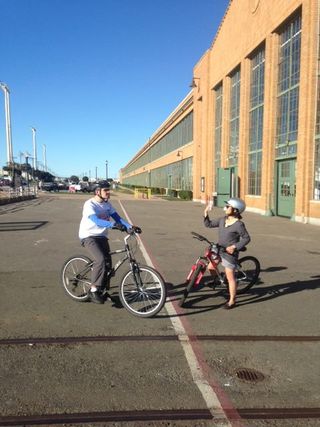 Tuesday was Charle's nth (I have lost count) IEP and the big subject of discussion was his ITP.

That stands for Individual Transition Plan. Charlie being about to turn 18 in less than months, it is time to talk about that terra incognita, When School Ends.

Pragmatically, this meant that, as Jim and I and Charlie's principal, teacher, therapists, behaviorist and his case manager sat around the table, the talk about last year's progress (some nice solid gains in counting and counting money in particular, telling time, turn-taking with peers, writing his first and last names) and the upcoming year's goals also featured consideration about whether or not some of these (learning to self-manage distress and stress, measuring objects and liquids, initiating greetings) apply to employment and independent living.

Quite a few did which is to say, Charlie's education, his remaining four years in school until he turns 22 years old, have a very specific goal in mind, preparing for the great hereafter of the rest of his life.

Charlie's education started just about 17 years ago, when he was being diagnosed with autism via the Child Development Center at the Minneapolis Children's Hospital. A case manager (I think her name may have been Eileen -- I'll have to check my journals -- she was only in that role during Charlie's assessment, after which his case manager's name was Mae Thao) started talking to me about Charlie having an IFP, an Individual Family Plan, as he was not yet three years old and it was a great thing in Minnesota that the school district handled these assessments for services from zero to three and beyond whereas in some other places this was not the case and that he would have an IEP when he turned 5.

The information I just related in those last sentences went right over my head on a late winter afternoon in St. Paul in 1999. I was in the second-semester of my first tenure-track job teaching Classics at a local Catholic university and Jim was flying up every weekend from St. Louis where he was on another local Catholic university's faculty. Charlie, who was in about the 95th percentile for his height, had barely started walking and evinced a huge interest in a set of red, blue and yellow plastic stacking cups and the door of the CD player. There was definitely snow (frozen and falling) outside.

Charlie's IFP is in a box in our garage along with a pile of other school and medical documents, after being toted around to six different households. These include his many progress reports, from all the in-district public school special education and autism programs, the one private school and the two non-public, out-of-district, separate schools he has attended. Not every one of these notes progress; in fact, there were quite a few years that Charlie's reports (for instance when he was around 7, when Jim began to teach him to rides bikes in earnest) seemed to display a few SPs (Some Progress) and quite a few of NPs (No Progress).

I always thought I would be in a constant state of mild terror around the time Charlie turned 18 and we started to talk transition. His last case manager in New Jersey gave us the sense that, on turning 21, Charlie would be turned over to the state's Division of Developmental Disabilities and the Division of Vocational Rehabilitation Services in Trenton.

It seems there will be some continuity and coordination of care for Charlie as he prepares to leave school, in part through the Regional Center in California. His triennial review is coming up in September and his Regional Center case manager will be invited as the focus will be, as it was at Tuesday's IEP meeting, on transition. There's a start to the people who will oversee what he does then talking to the people who are teaching him now.

With Charlie working one hour a week at a work assignment cleaning the Richmond Auditorium (lots of windows and tabletops have been washed) and awaiting a new one, and handling himself very well on field trips to movies and the California Academy of Sciences, and pushing the shopping cart for school expeditions to Walmart after he's counted out money into envelopes for each student to use, we have been getting a glimpse about what awaits Charlie and he has too.

Posted at 16:45 in Adolescence & Teenagers, Education/School, Growing Up | Permalink | Comments (0)