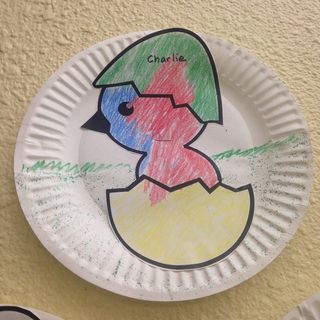 We went to the Open House at Charlie's school last week and were pleased to see his colored-in picture of a chick (Easter having been a few weeks ago) affixed to the wall outside his classroom.

In the first year of Charlie doing ABA when we lived in St. Paul, his lead therapist drew him pictures with really thick lines to teach him to color. He loved doing this and, for a good year or more, did a very nice and precise job of coloring with markers, showing a particular liking for pictures of a bucket and a fish. For a while, we and the therapists would sit beside him and color the same picture and have him imitate what we did.

Then Charlie took to coloring on his own. Over time, he started to use only the colors blue and green and then just to color (within the lines) the entire drawing in green.

As he approached 7, Charlie's coloring became a zigzag, very fast scribble that was the furthest thing from 'between the lines' or, indeed, 'coloring.' Soon we came to the quite clear conclusion that he was done with the whole business. Bike riding, walking and music (interludes on the piano and cello and then the iPad) took precedence.

Occasionally, as when he created his Mondrianesque collage at his old school in New Jersey a couple of years ago, Charlie would show a glimmer of his old interest in pattern and colors.

I would doubt (though very fine if it's to be the case) that his colored chick is a sign of a re-entrance into some sort of artistic inclinations. I do find his most recent coloring to offer a glimpse into his ways of perceiving the world. In Charlie's rendition, the bottom egg shell is mostly solid yellow. Green, blue and red are in rather well-defined swatches on the chick and the red part recalls the overall shape of the half-eggshell hatted bird. Charlie has been careful to color in the chick's eyeball.

I rather suspect -- and can only do such, but the past nearly eighteen years have given me ample time to watch Charlie's pattern-makings of colors and shapes, and to reflect on my own capacity for such (it helps me figure out languages and analyze literary texts) -- that Charlie does not, as many of us do, see a chick in an eggshell but a collection of black lines of different shapes and sizes. He colors them in a way that is tailored to his understanding of their pattern: the peak at the top, a point sticking out to the left.

Charlie perceives the world (who does not?) in certain patterns and orders. But the ones he perceives and looks for are a bit different than many that us do. Rather than hunting out the face of the chick, he grasps the general shape of the drawing. He sees the whole but the parts add up to something other than what might more commonplacedly be grasped.

Saturday afternoon, he was looking up and down at the sky and out to the waters off the Richmond Marina on a breezy bike ride . As a result of rain overnight, the sky was exceptionally striking and with Constable-worthy clouds, the bay was sparkling, and riding out there we were in a world of mostly lucid, lightly green, blues.

Looking at the pic before I read your post I guessed you were going to write about how Charlie had colored it to resemble a bluejay or robin or other bird he sees frequently while out and about. That's what I saw.
So much of interpretation is in expectation.

You are very right!
I'm not sure Charlie knows what a bluejay or robin is, though both have been pointed out to him at some time. He definitely has an eye for colors.