Obamacare in the Age of President Trump

I used to be a blogger and occasionally the spirit arises in me, for instance when writing up this week's discussion forum assignment for my Medical Terminology students. 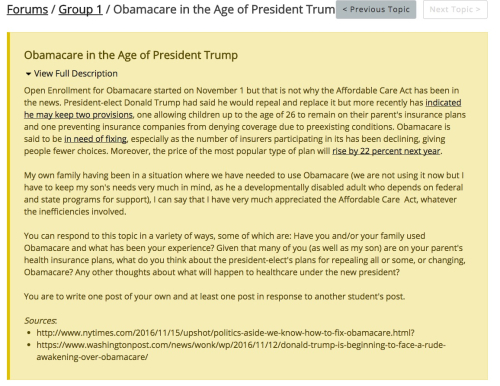 (The full text is below, in case that screenshot is a little difficult to read.)

Open Enrollment for Obamacare started on November 1 but that is not why the Affordable Care Act has been in the news. President-elect Donald Trump had said he would repeal and replace it but more recently has indicated he may keep two provisions, one allowing children up to the age of 26 to remain on their parent's insurance plans and one preventing insurance companies from denying coverage due to preexisting conditions. Obamacare is said to be in need of fixing, especially as the number of insurers participating in it has been declining, giving people fewer choices. Moreover, the price of the most popular type of plan will rise by 22 percent next year.

My own family having been in a situation where we have needed to use Obamacare (we are not using it now but I have to keep my son's needs very much in mind, as he is a developmentally disabled adult who depends on federal and state programs for support), I can say that I have very much appreciated the Affordable Care  Act, whatever the inefficiencies involved.

You can respond to this topic in a variety of ways, some of which are: Have you and/or your family used Obamacare and what has been your experience? Given that many of you (as well as my son) are on your parent's health insurance plans, what do you think about the president-elect's plans for repealing all or some, or changing, Obamacare? Any other thoughts about what will happen to healthcare under the new president?