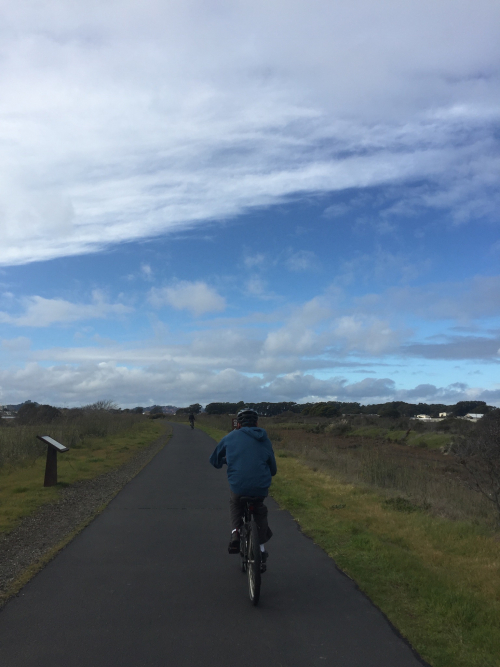 First, Charlie finished out the last days of his teenage-year decade and opened up the one he'll spend his twenties in with a solid 18 days of riding bikes on the Bay and in the Delta and in very fine and poised form.

Second, there were horseback riding lessons too on his fourth horse, Club, and meals in local burger joints. There was a beach trip with friends and the Golden Gate Bridge in view. There was down time and car time, there was rain and windswept sunshine.

Third, there was a Greek dinner at which Jim and I toasted our 21st anniversary on the heels of the bike rides, grading, final exams, final grades; a return to Virgil and a taking-up of Theocritus.

Fourth, there was me regaling Jim with why I have Watership Down memorized, recognizing it was through it I first read certain lines of Cassandra's prophecy in Agamemnon that have ever since been an echo in my head, summing up the story as the survival of the unfittest.

(Given these past several years, that notion rings prophetic.)

Here is the fiver.*

*Had I known Jim back in the day I would have gotten this word's pronunciation correct. Sixth grade me thought it rhymed with 'river.'

Looking forward to another year of your posts Christina. They are always a pleasure to read. Happy almost birthday to Charlie.