Home Archives Profile Subscribe
The Vaxxed and the Unvaxxed, Take 2 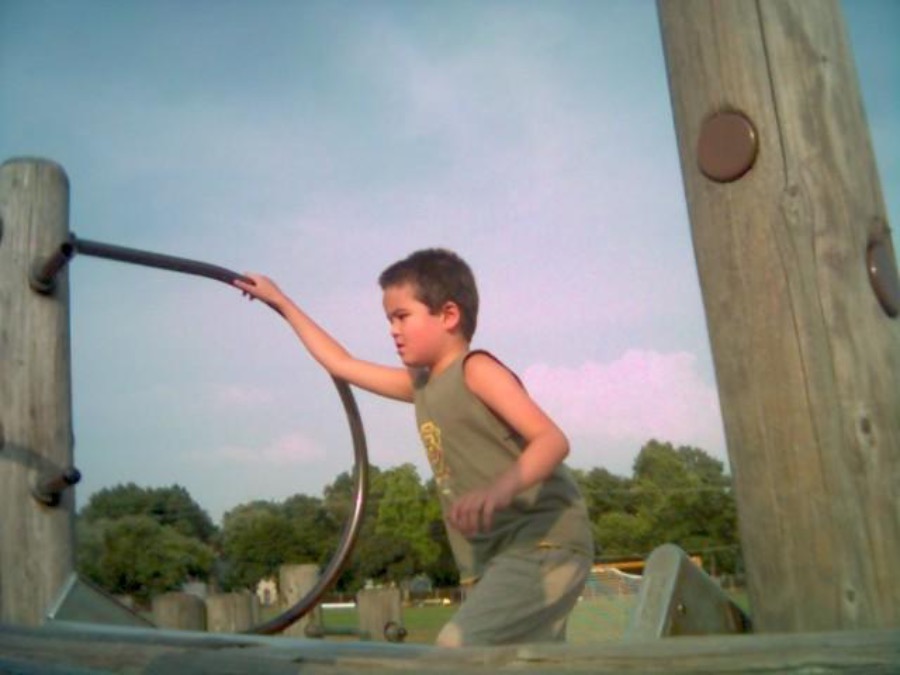 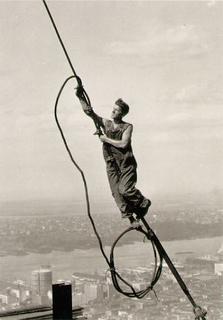 Far away in his office in the Bronx, Jim said, "That photo just makes me think of a Lewis Hine photo of iron workers." Charlie was walking up a metal slide (while many these days are plastic) and his muscle shirt (which sports a headphone-wearing animal design) revealed that, thanks to all that time in the pool and running around in our front yard, he is one tan boy, with well-rounded shoulders to match. These days, he definitely prefers walking up slides to skidding down them.

I had a sense of the photo Jim was talking about and looked up "Louis Hine" on the web, and here is one entitled Icarus atop Empire State Building (1931). Icarus was the son of Daedalus who, in Greek mythology, was a master craftsman: He constructed the Labyrinth to house the Minotaur, and also made wings of wax for himself and his son, Icarus, to flee from King Minos of Creek. Icarus flew too close to the sun, the wings melted, and he fell into the ocean. Daedalus flew to safety and crafted a temple at Cumae, where Aeneas in Virgil's Aeneid meets the Sibyl, a priestess who leads him down to Hades, the Underworld. The myth of Icarus is often interpreted as an allegory for humans' over-confidence in their abilities and the man in Hine's photo on a wire--I can't even think how high up he is--does seem to be pulling himself up into the heights of the sky, the Hudson River and Jersey and a bit of steel girder below.

It was miserably hot today; it being late afternoon, the conditions for slide-walking were pretty good. The metal had cooled and there was no chance of slipping down as on a rainy day. Charlie walked holding the slide's sides, then reached to grasp the metal half-circles. A part of me wishes he would just "do what the slide is for" and go down it; I suppose Daedalus thought this when Icarus flew up towards the sun on his waxen wings.

And another part of me joys in Charlie expressing himself, doing what he imagines wouldn't be such a bad thing to try. Due to the social impairments that are part of autism, we often find ourselves "redirecting" Charlie to "appropriate" behavior (looking at the cookies in the grocery store, not breaking the box open for a sneak bite; standing in line and not flapping his hands and running back and forth). Charlie has plenty of his own plans for what he wants to do and, at 8, he is much firmer--unabashedly independent--about insisting on doing them.

Charlie and I made a fast stop by my office this afternoon. "Home house," he said, as soon as I parked the black car in Jersey City. He then had a bit of fun climbing on the staircases in my building and checking out the view from my window. As we drove home on the Pulaski Skyway, I glimpse the Empire State Building in the rear view mirror. "How 'bout we get some sushi for lunch?" I asked. "Shopping cart sushi," said Charlie. It has been several days since he last had his "favorite Japanese food" and he was a bit subdued at the store, choosing the Deluxe pack quickly. Later, we drove to his favorite playground and, to make up for yesterday's adventure, had a good time and treated ourselves to a trip to Target.

After attempting to put various Barney DVD's, a Sprite, and a bag of Cool Ranch Doritos into the cart, Charlie got the latest Wiggles CD. "You're to old for Barney," I reminded him. "And those Doritos have some milk-thing in them, and you're allergic." Charlie regarded me with his big somber eyes, and listened, and put them back. "You're a good guy, Cholly," I said as we drove home. "Open Wiggles," said Charlie. "Home house, Daddy home, we'll be back!"

We strive everyday to do the best thing for Charlie and, while we may not quite get there with our poor human tools, I'm always gladdened because we try, and think that Charlie knows this, too.